Get subtle messages?? While watching History channel last weekend. This episode about the Seven deadly sins came on. We watched the one about Sloth. Sometimes I think God is trying to get our attention. Those little pebbles; plink, plink, hit you in the head...it's God trying to tell you something he wants you to do or stop doing...Because, in the car on the way to College Station last Monday, 2 more times on two different shows, I heard things about the seven deadly sins and Sloth reared it's ugly head again! plink 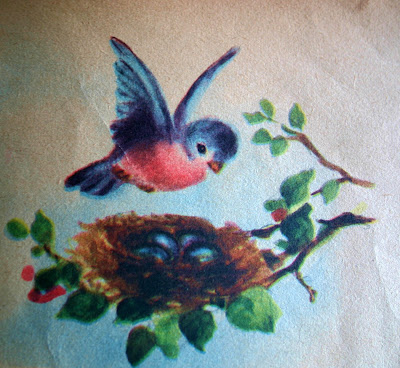 On the trip home, I thought about all I'd heard, and decided something in that was meant for me.

Now to just figure it out...so today I kept busy around the house and in the studio and tried to stay off the computer too much until 'after hours'...maybe that's a habit I need to get into. This computer eats up your time rather quickly if all your doing is looking at other's blogs, etsy and such..I'd much rather have a few plinks of a pebble, than get hit upside the head with Brick from God, for I really think that's next, if you don't listen...

I'm trying..and today (Monday) was a good start, I felt like something got done and I was not wasting the whole day away..

Lord keep me strong for I am weak...
Have a great Tuesday!
t
Posted by Tina(Taken over by her daughter, Nicole) at 6:15 AM

Yes, I definately have gotten subtle hints from God through surprising means...funny how if it's true, God chooses the TV as a vehicle to get a message through. Maybe thats where we most pay attention.

It's wonderful when you recognize He's trying to get through, isn't it?

Hi there! I just came over from Kari and Kijsa. I agree that the little pebbles are much better than the bricks. Good for you for "getting" it quickly!

I totally know what you mean. In fact, I think your blog is another one of those little nudges from God for me. I know there's something I need to do and I keep putting it off and it seems like every time I go to church the preacher is talking just to me and tv and radio all seem to be making that same point. You know what you're supposed to be doing, now do it! Thanks for the little nudge.

Oh my so true! There is a time to be on here, and a time to not! I have been spending less and less time here..still lots though..on the computer..but am getting so much more life accomplished. ty for the reminder.

Glad to see others have my problem... things not done because I'm "playing" on the computer. Thanks for the reminder. Off to do laundry.

That "Brick" comment made me laugh out loud! Love the title of your blog. I promise I never visited before I created my blog. :)