I don't know about your part of the world, but here yesterday it was BEAUTIFUL!! No wind, sunshine, decent temps..and after Church, we were outside..I went for my walk and as I was coming down the road, I heard motorcycles! Then I saw motorcycles! Hub had taken them out of the shop and was dusting them off!! Yes! that means he can't stand it, and we are going to ride!

It was our first ride of the new year! I donned on my riding apparel as quick as I could. We got on and made our way to the highway. Both bikes (Baby, and Captain) needed their throats cleared so we did a bit of highway speeds to get them feeling better. Like everyone else this time of year, stuffiness and drooping feeling unless out and about.

We passed by the fields where the camels live. We've been here over a year and I've not seen them once! But today I did..They are outside Iowa Park in a field along the highway, very cool..then we went on some farm to market roads, narrow and small thru the fields and ranch lands of the area.

We were nearing a Burkbernett (everyone says Burk for short) and saw alot of smoke rising ahead of us. As we pass a group of houses, it was thicker. My first thought is some ones burning trash..No, it was hay bales! If you've not seen those huge round hay bales on fire, it's really bad..I spot a woman running towards them with the phone in her hand and that was the only person out there we saw. So, we turn around and go back. By then the neighbors are out, a pickup has stopped and those things are blazing to beat the band..

Will runs over to help push a boat out of the way, for the flames are licking it's trailer. I ran over to the area near a travel trailer and start stomping out the grass...seemed like I would never get it stopped...it was getting nearer and nearer to it..with it being as dry as it's been here, that grass was tinder at it's best. Will manned a water hose on the bales and some of the other men were finding hoses to use. After about 20 minutes the fire dept shows up..they have to basically tear the bales apart for they can smolder for a bit then catch back on fire..Will's still manning the hose he has for awhile and then things get slowed down and we are on our way again..it was excitement..glad it was not OUR excitement.. Thank goodness no one was injured but, that hay is about 75$ a bale, the lady of the house,said she knew, she was in for it from her husband...to find out, she was burning away some grass, and it got out of hand for her and went straight for those bales of hay, that they had bought and put in there yesterday! So, not a good deal for them.

We headed thru Burk and out to more fm riding to make our way home back to the shop shack. We made about 82 miles and helped put out a fire, I'd say we had a pretty good day, we thought so, anyway. Did some piddling around and watched the sun go down..

Here are a few of the goodies Andreea blessed me with last week: 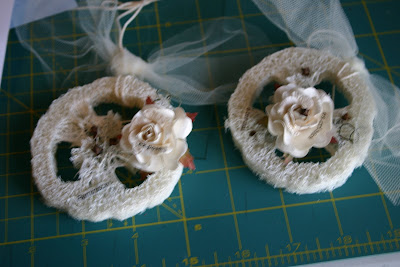 These are my fave, the softness about them and the texture of the sponge really caught my eye.. 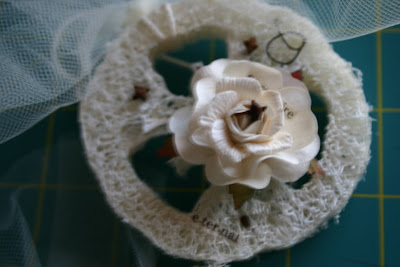 She gave me 2 of these dollar store Christmas balls filled with images: 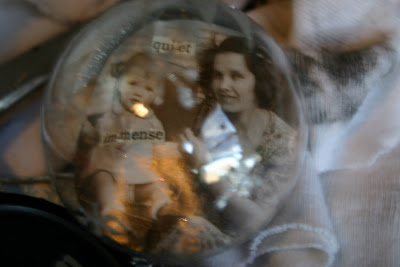 Plus a whole box full of stuff that I've yet to get out to show you...so stay tuned!
I've been working on some new necklaces and charms for Etsy..maybe this week I'll get a few of them finished up. Some of the necklaces may be going to a motorcycle shop~ The owner saw my work and asked if I wanted to put some in there, he thought they might be good for the ladies.
Hope your week goes well!
later, t

Posted by Tina(Taken over by her daughter, Nicole) at 7:39 AM

too much excitement for my old heart (ha) Cool beans on the shop putting some of your necklaces there....YAY

Good of you guys to stop and help. And yep, the necklace thing is soooo cool. Andrea sent ya some cute stuff too!

Wowzers, what a Sunday thrill Tina, lucky you came along and helped the lady with the hay bale fire, could have been horrific for those folks had you not stopped to help. You both have great hearts for people. bacon