You know that feeling when you spy something great at the thrift????? that little thrill that you get in the pit of your stomach??? that little electric bolt that tingles your fingers??? Well, I had it yesterday at Goodwill!!!! Found these awesome French vocab cards!!!! 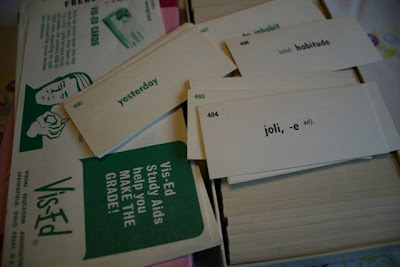 They were barely even used!! Hardly out of order and with the info still in the box!!! YUMMY! I've lusted after them for ages on Ebay and on other people's blogs..and now I have my own stash!!! MY OWN for only ....get this......ninety nine CENTS!! yes! under a dollar, not 15 or 20 like they go for on Ebay...just ninety nice nine cents!!! 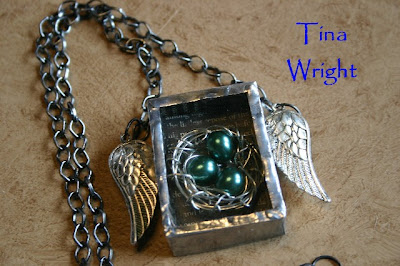 I put this on Etsy yesterday..I hope someone else loves it too...the photo turned out great and I found out some things while doing these shots...and I'll be doing the same set ups again for this jewelry stuff...

Posted by Tina(Taken over by her daughter, Nicole) at 7:27 AM

Your necklace isn't too shabby either..love that nest!

I'm so jealous of your french vocab cards. awesome.

Those flash cards are fabulous!! You always get the best deals! Happy Halloween! :)Mendy