That's what I call these cool mornings...it makes even the oldest dog a bit frisky when it's out for it's morning rituals. Watched horses this morning doing the frisky thing..bucking, running, even a couple of jumps..they were frisky in this cool air~


Yesterday, the monarch butterflies were making their way South. I was hoping to see them again today..but no luck yet.. 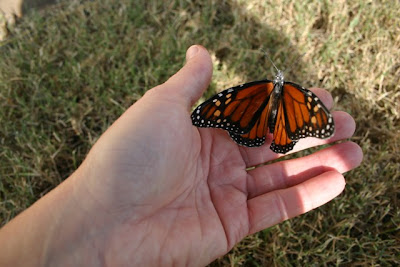 This one was on it's last legs, could barely hang on to my hand..poor dear...I put it on the humming bird feeder, but later found it dead in the grass....


There were hundreds of them and our area seemed the thickest..I traveled to town and they thinned out as I headed west..They were wonderful polka dots floating in the breeze..standing in the yard watching them float by gave me that sense of wonder and hopefulness you have when you are a child but seem to loose as you grow older..I felt that again for a brief time, it was great..

Remember to sign in for the prizes on my Monday post, it's open until Friday at 6pm. Thanks so far for all the comments and Birthday wishes..it was another one done..talked to my mama that morning..I told her thank you for the hard work, she said it was hard work...lol..My sister called me too, and the grands called me too..even a friend in Houston gave me a call. It was a nice day. Hub gave me a gift card for Michael's and a sizixx sidekick and dinner out...

More photos are being loaded up on the Paper Cowgirl flikr group if you are intrested....

Go out and be frisky today!
tina
Posted by Tina(Taken over by her daughter, Nicole) at 8:49 AM

Great minds think alike! As I was thinking that very thing this early AM as I watched the silly squirrels dance about and have fun. Frisky weather indeed! LOL.

Glad your bday was good!

Glad your birthday was nice. How awesome to see the flock of Monarchs. I saw them once as a small kid, and it was so cool.

I would love to see the monarchs migrating, it must be wonderful, though sad to find the tired dying ones...