Are you ready for a ride?

Hub brought the cable home! yea!! We down loaded photos! Some good, some not so good..

We had the bikes packed and ready in about an hour on Wednesday evening. He was late getting home and we thought we'd be way down the road by the time we were just getting started. We normally don't leave out in the evenings. The normal is an early rise to start the day. It was a nice change. More worries, but a nice change. D-E-E-R are the worry in the later hours of the day...But to have those late rays in your eyes were a nice relief after the Texas sized heat that had been the last few days.

As we rode on thru the early evening the air cooled down and made it a pleasure. Smells were drifting our ways. Cedar trees, mowed grass/hay, dry earth were many of the smells we were riding through. Hills and sweeping curves were also on the menu as we rode. Traffic was light and we met few as we made our way. Back roads, farm to market roads they are called her in Texas. Little black tops with little or no shoulders, but traffic is light and usually these are the fun roads for motorcycles.

It was just getting dark as we pulled in to a Restaurant I've not been in for years. Mary's in Strawn Texas. As we pulled up we were soon talking with a group of folks with take-out boxes in their hands. They had come over from Ft. Worth on their bikes to eat dinner at Mary's. Hondas, Harleys and in between were in their group. We headed in after a friendly smack down and road discussion. That is one of the first things that happens, where you from and where are you headed are always asked, especially when your packed down like we were.

Chicken Fried Steak is on of the main stays at Mary's and we were not disappointed this trip either. Full of oil field workers, families, cowboys even this late summer night, noise was at a high and tea and beers flowed around us. Bellies full and darkness had set in as we walked out the door. Zipped up jackets and headed out. Following our headlights in the dark we made our way. Stopping for the night in Brownwood, it was near midnight. We were in good spirits having got a head start on the next days miles, we unpacked and went in for the night. 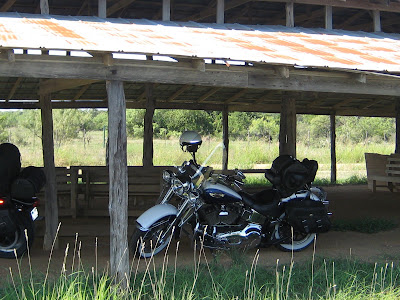 Able to sleep in an extra hour, we took full advantage of that. After breakfast with the sun already warm we headed out. Fredericksburg Texas was where we were to meet up with another couple. We were not that far, so it was a nice relaxing ride down more FMs and State highways. Stopping here and there to look at things that interested us. Seeing people out mowing their yards, tending their fields and going about weekday business. We zipped thru their lives as they dotted ours. Seeing things that make me smile are what adds enjoyment to these road trips. Someone had carved a pouncing cat out of a fence post in the middle of no where..a funky eye catcher made from auto rims standing guard at the entrance to a business. Rivers running beneath us as we crossed bridges.

We made it to Fredericksburg by lunch time. Found our way through the masses of tourists for a place to park. A quick phone call and we were soon reunited with our friends from College Station; Leonard and Sue. Lunch and a cool off session at a local German Resturant. Cooling off and catching up were our main concerns at this time. After lunch the guys resigned to us girls for some shopping. 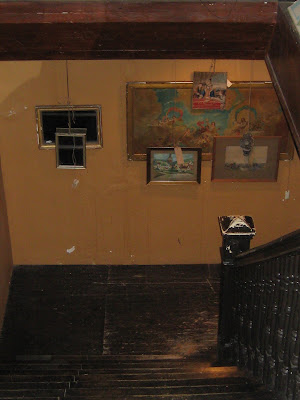 We tripped in and out of several shops, eyeing many wonderful things and discussing where and what you would use them for..then we stumbled into a wonderful antique shop. The displays were amazing, the prices were amazing and we had a great time gleaning ideas from there.

The guys couldn't stand it, they found us and in their little bad boy ways convinced us we needed to get back on the road.

Posted by Tina(Taken over by her daughter, Nicole) at 7:26 AM

Fredericksburg is one of my favorite places! Glad you had such a terrific time.

Looks like a great trip. I still can't picture little you riding a big ol motorcycle. I can't even ride on the back of one. Can you say "CHICKEN"