While still on my Paper Cowgirl high, I attended a Tim Holtz class! It was held at Ten Seconds Studios in Hurst on Sunday. We piled up a Tahoe full of ladies from the Crafty Scrapper and headed over. I'm glad I went... 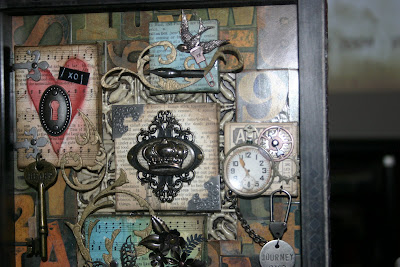 This is a poor photo of the original that was on display for the class. They split up the class. You took the inside portion from Tim, then you altered the outside of your frame with Cheryl of TSS.
Since I was with the CSS group, I got to be one of the "lucky" ones in the "A" group. So we went to Tim's Class first. 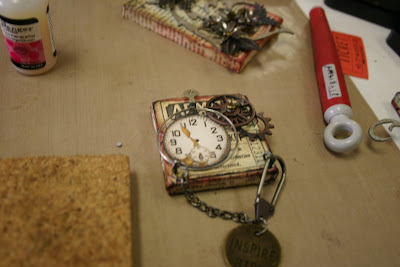 Here is a bit of mine, while working on it. I was very impressed in they way he managed the group. He had a power point going on too as he explained what to do. He kept people rolling..all the while, telling us : Don't think about it, Just do it..and that is what so many people don't do..they over think things..so, that slows down your whole process. I'm guilty of it too some days. I heard some people say it was fast paced, I thought it was just fine. I like to work fast. 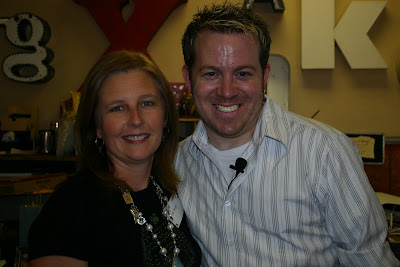 
Cheryl's end of it was good too. She gave a demo on how to line up your frame on the metal, how to emboss or deboss it and then let us go at it. Then another demo how to add the metal to your frames..we had a good time, I have a awesome piece. I expect to see some influence of this in some future works.


Paper Cowgirl has come and gone, but, we are still posting flickr group photos and blogging about it over at the PC blog, so check us out and see what you missed~


I'm still unpacking and decompressing from it all. Ideas running amuck in my head too.
Vendor night was very good for me and I have alot of pieces gone and now to redo my Etsy shop. It needs a face lift, in August it will be re worked with some new items listed.

Thanks again to all the gals who attended. Cindy and I are happy with what we are building right here in our own backyard, and want to see it grow, we can't make it work without you~


Happy Tuesday ;)
tee
Posted by Tina(Taken over by her daughter, Nicole) at 1:39 PM

Wasn't this a fantastic class. I was in group B so I didn't get to meet you. I'm sure our paths will cross somewhere in the future!

Tim's classes are so much fun. Hopefully he will bring this one to AZ. Glad PCC was a big hit
hugs

Oh My Gosh, I am soooo jealous. I would love to take a class from Tim Holtz! Love the piece that you made. Hugs***Renea

I always heard that you were fast.
:p


sorry, could not resist....that's payback for doing "me" over my reading glasses....cause Sis swears it was you and not her. Yeah. I'm rolling my eyes here.
-c
yapping cat

Oh wow! Congratulations on what looks like an amazing weekend of creation! You lucky girl! Your work looks amazing and I know we will get to enjoy it's impact in your work from here on! (as if it could get any better!)
marsha

Tina Cowgirl was fabulous and glad to help you out on vendors night..... I love my jars full of junk...... I picked up 2 rusted beer bottle caps today in a parking lot......
Can't wait to see how cowgirl grows.....