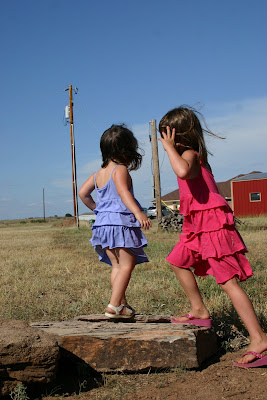 This week, I have been back in the 'hometown'...Keeping the grands at their house. It has been a good time, so far and wondering down memory lane..

How it used to seem like so many cars were coming down the road when you wanted to get out in traffic...Going down thru the 'rich' neighborhoods and now they don't look so expensive..not after seeing and working in the McMansions of today..

How the grocery store only has few choices of salad dressing, instead of a whole isle of it...How nice it is to leave your house unlocked during the day while you putter around in it..how nice it is to know almost everyone in the bank when you go in..How nice it is to be able to park near the door at school to pick up the grand...

The place where I grew up was just 2 blocks away from where the #1 grand is going to K..the house is long gone, my mother sold it a few years after my dad passed away and the people who bought it moved it off, they were just wanting the land..we went down that road on the way to pick her up the other day. It was a sad road..the houses that are there are so very run down, it was full of older folks when we were living there, ..all the houses were neat and tidy little yards and walls painted and windows repaired..but not now... The huge pecan trees that were out front are in sad shape. My dad was always tending to them, getting the sprayed and triming them up when the need be...Our yard had flowerbed always full of something blooming now it's just pasture grasses and weeds....We had lived there from the time I was 5, so there were alot of memories on that road..All the times I rode my bike down that hill to coast all the way to the highway..Walking home from school..roaming the fields out back...watching out for rattle snakes, for my dad had drilled that into my head from day one..never saw one though..Did find a dead on in the front yard once, the gas meter guy had killed it when he was reading the meter, and left it.... skeerd the begeebees out of me..Running around the near by streets at Halloween, when I was old enough to go out alone..I'll just bore you with all the others, so we'll leave it at that..

The girls and I are going to paint crowns and hearts on their closet door and bedroom door today. Awhile back I painted swirls on the walls and butterflies/dragonflies. The oldest wanted princess crowns someplace and that seems to be the logical place on the doors..we'll have fun with it, they are going to help me.

Prayers are still welcome for our family...
Thanks for the ones you have sent up for us so far.
Thanks for the comments too!
hugs,t
Posted by Tina(Taken over by her daughter, Nicole) at 11:27 AM

Hi Tina,
Still praying for you and your son and your entire family!

Wow what a trip down memory lane. How fun to be able to do that. We moved so much I would probably never find one place we lived. Have fun with the grands. Why do they have to grow up so fast? Sending more thoughts your way (my way of prayer). But, their cowgirl thoughts so they count for more!

Tina, what a fun trip down memory lane. We moved so much I would never be able to find any of the houses. Have fun with the Grands. Why do they have to grow up so fast? Sending more thoughts your way. Their cowgirl thoughts so they count more! hehe