Will wonders every cease?

For the last couple of days, we've had a barn swallow trapped in the shop. The poor thing would just fly in circles no matter how wide open we'd have the overhead doors...Then yesterday afternoon, when we came back from playing on the new toy (story is below) I opened the door as big as I could, one almost all the way open the other I couldn't get as open..

The poor fellow is flying around and around chirping...well, here comes in another bird.. I thought "great, now 2 of them in here to worry about", Well the second bird is flying behind the first one, chirping at it and The Second bird gets the first bird to follow it and out the open door they go!

Yea!!! His family had been hanging out on the north end of the shop, chirping away at him while he was in..there was no way we could reach him, it's over 16 feet at the peak...so we just hoped he could get himself out... Sometimes they get in, and then find their way out in a few hours, but we've not had one in there for over a day...or they fly straight thru when both big doors are up..I was glad this one got out, they are too pretty and eat pesky bugs...

I received a couple of emails the other day on the Somerset Gallery Article, about the Glass Fairy houses..Well, Jamie sent me a photo of hers! Is it not the cutest thing? 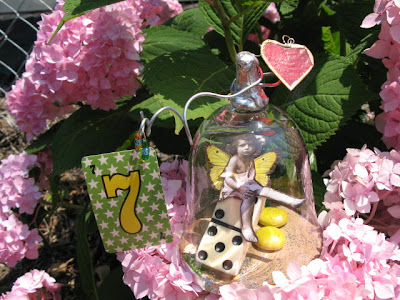 Jamie doesn't have a blog yet, but said she hopes to join the blogging world soon! She has some cool stuff!!

Here's the new Toy..Big Daddy picked it up Friday. It's a Polaris RZR, or Razor...it's a side by side 4 wheeler...we have a regular 4 wheeler and now this... You know the saying about Boys and their toys?! it's so true at this house! 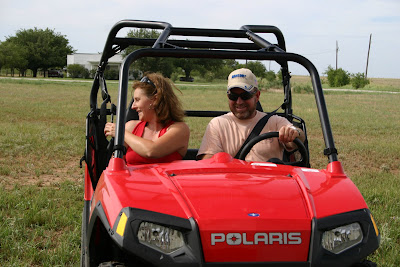 Needless to say, we've been out playing in this and checking it out. We live about 20 minutes from the Red River, and it's a perfect place to run this stuff, sandy and dunes, almost like the beach..I see a Colorado trip in our future to really give this a run...

Paper Cowgirl is coming along...we have the payment info now, so if you want to send in your money for your spot check out the blog!

Have a super Monday!

Posted by Tina(Taken over by her daughter, Nicole) at 7:40 AM

You are the sweetest! Thanks girly!
Hugs,
Robyn

Look how cute you look in that red four wheeler. I see trees in the background. Could those be yours?