Willie Nelson in his pigtails and bandanna...singing "On the Road Again"...that's going to be me..

Here's the story and I'm stickin' to it: Soldier Son calls us yesterday, his exhaust brackets broke on his NEW, did you see the NEW part? bike...so we go up to Oklahoma to get him and the broke bike...He's to be back on base this am..didn't happen...he's got another couple of days now to get back up there to Kansas...

This Dealership in Wichita Falls, Red River Harley Davidson, are being ASSES about doing warranty work on this, so after a few calls to the exhaust place, and the dealership that he bought the bike from they have an answer...So, guess what? MOM is going to take the broke bike back to College Station Texas to the dealership there, who were great about the whole thing, I might add...and leave it there to get all fixed up...So, if you are passing thru and need something at the HD shop in CS tell them that Tina sent you in..they'll know who your talking about..(she rides an 06 Deluxe and used to live there..)

Looks like brite and early tomorrow I'll be headed out in the Big Ass truck pulling the broke bike on the trailer...so if you don't hear from me in a few days send out the search party..

Today, is the last of the dominoes I had finished before my trip..the one on the left with the yellow flowers is sold..but if your interested the others are for sale..just give me a hollar..10bux. free shipping.. 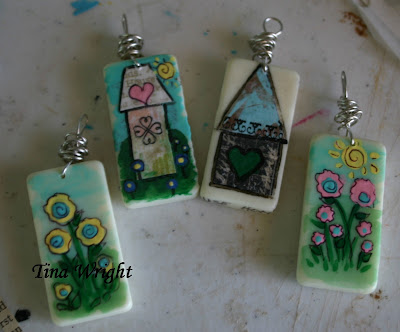 We are starting a blog about the retreat, it's at: http://papercowgirl.blogspot.com/ no work on it yet, but that's fixin' to change...yeehaw...

Posted by Tina(Taken over by her daughter, Nicole) at 1:13 PM

love your pendants...but would really like a pict of you on the bike!

Safe travels my friend! What we won't do for our soldier boys. We've made a few trips to help out our son-in-law as well. We're so lucky to have these boys.